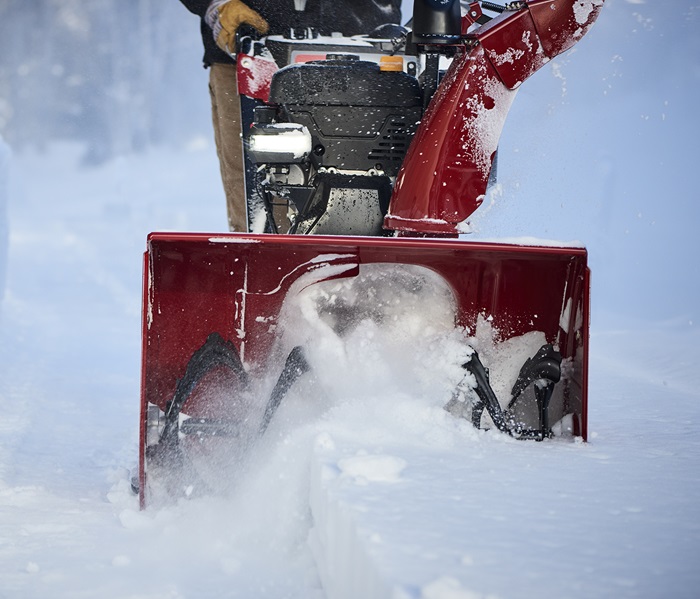 Winter’s here and if you’ve been following the weather reports, most of the United States has already suffered some kind of severe winter weather. So, obviously, days like that make your snow blower the most popular appliance in the home.

In recent weeks we have been discussing common snow blower problems. In Pt. 1 we described how to clean the carburetor of a blower. In Pt. 2 we discussed how to handle a gas leak.

In this article we will cover what prevents a snow blower from throwing snow.

The main reason why a snow blower doesn’t throw snow is that the chute or auger is packed with too much snow. When you are blowing wet and heavy snow, the buildup can get worse.

Should this occur, it is advised that you turn off the blower and get a hold of a snow blower clean out tool to remove the packed snow. Even after assuring that the machine is shut off, it is still essential that you remain cautious when cleaning out the chute and auger. It is advised that you don’t use your hands to clear out the snow. Instead, there is a so-called snow blower safety tool available from Amazon that can serve as the ideal method to deal with packed snow in the blower.

Other issues that could occur that would prevent a blower from throwing snow include:

• A damaged or frozen impeller

• A damaged auger or loose belt

If after you clear out the packed snow from your blower, it still doesn’t throw snow, then you’ll have to check the impeller, auger, and belt.

Two-stage and three-stage snow blowers feature an impeller that thrusts snow out the chute. Inspect the impeller to assure that it isn’t broken and that it moves freely. Another issue to consider when checking out the impeller is whether or not it’s frozen. An impeller can freeze due to moisture buildup. When temperatures drop below freezing (32°F), the water can freeze rendering the impeller useless. This can occur when residual snow in the discharge chute and drum melts due to heat coming from the engine. The water drips onto the freezing floor of the impeller drum and there it freezes. The frozen water pools and fuses the impeller to the drum of the blower.

Before using the blower, it is suggested that you manually spin the impeller before starting the machine to ensure that it moves freely. If it does not, then use a hairdryer to melt the snow.

Another way to handle the issue is to place boards or other stable material under the back tires of the blower. This allows melted liquid to drain toward the front of the machine.

Next, take a few buckets of fairly hot water and pour them down the chute over the back of the impeller/blower fan. This will melt any ice build-up on the backside of the impeller as well as the housing.

To prevent the impeller from freezing when storing the blower in a cold environment, follow these five steps:

1. Run the auger and impeller of the blower for a few minutes after you have used it to clear snow.

2. Shut off the blower and dust off any remaining snow.

3. Manually spin the impeller so that the blades don’t point straight down.

4. Place a heat-source like a hairdryer or an incandescent light bulb in the housing.

5. Cover the blower with a tarp to retain the heat and to keep snow from accumulating on the machine or store in a warm dry location.

Another reason why a blower won’t throw snow is that the belt is loose. This prevents it from spinning fast enough to throw snow. Tighten the belt if this is the issue. It is also suggested that you inspect the auger for any damage that could prevent it from picking up snow. If you discover that it is damaged, replace with a new auger.