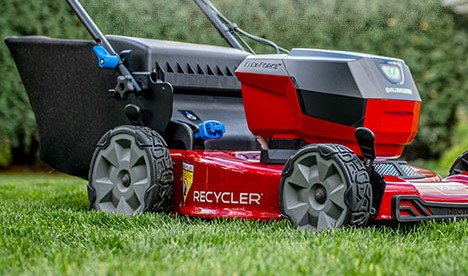 Regardless of the brand lawnmower you own, you have to maintain it properly to assure optimum performance. Also, in the case of lawnmowers, regardless the brand, there will come a time that you’ll have to replace a worn carburetor with a new one.

For a Toro Recycler 22-inch 190cc Personal Pace Lawnmower with blade override, the process of replacing a carburetor yourself is not an impossible task. If you have do-it-yourself skills, then it could be a pleasant way to waste an afternoon.

Toro uses several models of the Briggs & Stratton engine to power their lawnmowers. The engine features a powerful 4-stroke power plant. The particular model that is the subject of this article has a single side draft carburetor with no throttle. The fact that the carburetor has no throttle is not an issue. It works fine.

The lever of the handlebar of the motor does not control the speed of the engine. In this case, it releases the friction stop. So, when you press the lever, the engine operates free. Release the lever and the engine stops.

The choke is heat activated. That means it opens once the engine is running at operating temperature. The carburetor is running open. The shape and opening on the sealed air filter housing restricts the air as fuel is supplied through a siphon hole. The size of the hole is enough only to allow a specific amount of fuel at a time. When everything is working in tandem, the engine continuously generates the same RPM without the need of external adjustments.

The configuration requires regular maintenance on the air filter and the siphon hole on the carburetor needs to be cleaned regularly.

So, it makes sense that if you need to service the carburetor, you should also take a few minutes to focus on the air filter, too.

Items you’ll need for the project include:

First, you’ll have to remove the air filter. Use the screwdriver to loosen and then remove the top screw that holds the housing in place. Once the screw is loose, the housing will swivel. Spin it out so that you can pull it up and loose.

Next, pull out the filter and install a new one. It’s a good idea to clean the air filter housing as best as you can.

While you’re at it, go ahead and replace the spark plug.

The mower should work fine. However, if it doesn’t start some time during the next two months, then you can again use your DIY skills to solve the problem.

Should you confront the issue, then disassemble everything, clean the parts and then put it all back together. If the mower still doesn’t start, then the issue could be the amount of fuel that’s flowing through the siphon hole of the carburetor.

You need to focus on the fuel bowl, which is on the lower section of the carburetor. In the center of the fuel bowl there is a brass colored bolt. The metering needle is in the bolt. Remove the bolt, spray the top of the needle with carburetor cleaner and then re-place the bolt.

The needle may not look dirty when you see it. However, a very small amount of fuel that happens to include microscopic debris can actually clog the entire system.