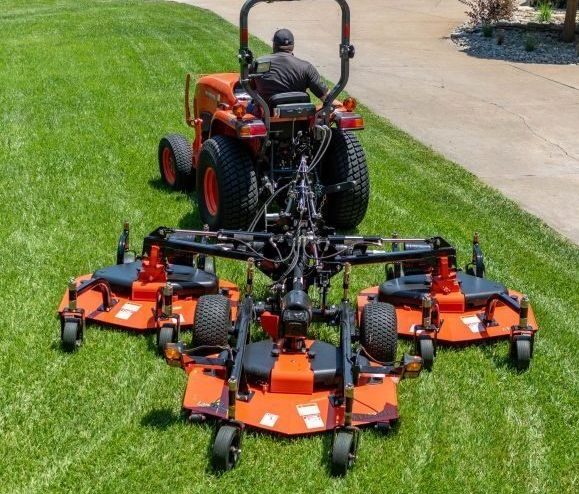 Lawneq offers products from Land Pride, a manufacturer of tractor implements with manufacturing plants in Abilene, Kipp, and Lucas, Kansas.

Among its implements, the company produces a series of mowers designed for Kubota tractors. The models include:

Designed for use on expansive and well manicured lush turf including fairways, parks, school yards, sports fields, and small estates,

the AFM42211 All-Flex Mowers are available with slip-clutch or conventional wing driveline configurations and features independent deck flotation and zero turning radius, which is possible due to its sleek frame design. It has an 11-foot cutting width. It’s rear discharge design and floating cutting decks assures a great reduction of wide-area cutting times and produces finely groomed surfaces at mowing speeds from 1-6 mph.

It required 30 to 65-horsepower and matches with Kubota L Series, MX Series, and M Series tractors.

Features include a counter blade rotation on the left hand deck that spreads grass clippings more evenly. Its wing decks discharge grass clippings so that they don’t cover or bog down the rear deck.

The mower comes with a five-year limited gearbox warranty to ensure quality and long lasting performance.

Their rear discharge permits a wide, even dispersal of grass resulting in a fine thin layer directly behind the mower rather than on the sides. This ensures that grass will not be blown in all directions. It is also allows easy mowing around objects.

The mowers also have quick-hitch compatibility that ensures quick connection and disconnection without leaving the tractor seat.

The three-point floating points on the top and bottom of the hitch float up and down to permit the mower to float over uneven terrain. The models also include non-aligned gauge wheels, which keep the rear wheels from tracking behind the front wheels to reduce layover grass.

The FER16 Series models come with a five-year gearbox warranty.

The mower features independent deck flotation and zero turning radius due to the sleek frame design. It reduces wide area cutting time due to its 14-foot cutting width, rear discharge, and floating cutting decks. It delivers a beautifully groomed surface at a mowing speed up to 6-mph.

The mower features 23-inch large transport tires that ensure less grass compaction. It also has a low deck pivot that permits greater side-to-side flotation of the wing decks. Anti-scalp rollers protect the nose and trailing edges of the decks as well as the turf.

Its sleek design permits tighter turns so the mower can achieve a zero tune radius. An over center release takes tension off the drive belts during extended off time or for belt replacement.

It is also covered by a five-year limited gearbox warranty.

Designed for lush turf grasses one would find on sports fields, theme parks, fairways, turf farms, and large estates, this mower also offers independent deck flotation and zero-turn radius do to its sleek frame design. It includes hydraulic wing cylinder that lift the wing decks to a width of 8-feet, 5-inches for easy transportation from one mowing site to another. This is critical if you wish to transport the mower along public streets or rights-of-way.

Its cutting width of 16-feet, rear discharge design, and floating decks reduce cutting time and delivers a beautifully groomed surface at mowing speeds of up to 6-mph.

It requires 40 to 70-horsepower and matches with Kubota L Series, MX Series, and M Series tractors.

It includes 23-inch large transport tires, a low deck pivot that permits greater side-to-side flotation of the wing decks, anti-scalp rollers that protect the nose and trailing edges of the deck as well as the turf.

An optional hydraulic wing unlock allows for easy release from the tractor and can be performed from the tractor seat while operating the tractor control lever that raises and lowers the mower decks. The over center release takes tension away from the drive belts during extended off time or for belt replacement.

It is also covered by a five-year limited gearbox warranty.

The AFM4522 mower is designed to be a commercial mower that can mow more than 10-acres an hour. It features a high blade tip speed that is ideal for producing a quality cut on Bermuda, fescue, or rye turf grasses. Its narrow width permits easy access through small areas including 10-foot gates.

This mower requires 65 to 100-horsepower, has a width of 22-feet and is designed to match Kubota M Series tractors.

An optional hydraulic wing unlock is available that can be released from the tractor from the driver’s seat. Its narrow width of 9-feet, 6-inches makes it easy to transport. The sleek design allows it to achieve a zero tune radius and it also includes a 1-5/8” commercial duty blade spindle with a cast iron housing, steel plate support, a three-quarter inch thick blade support bar, and a remote greasing line.

It is covered by a two-year limited gearbox warranty.

This mower is designed for commercial use, is easy to maintain, and features six free-swinging medium lift blades that perform a uniform cut in heavy turf grass. It can get close to obstacles due to its tapered deck and it has a rear discharge that directs cuttings toward the ground for easy distribution on the lawn.

Features include a rear discharge and quick-hitch compatibility so you can quickly connect and disconnect usually without leaving the tractor seat.

The top and bottom of the hitch has three points that float up and down to allow the mower to float over uneven terrain.

A frame appears over the deck that is designed to take the stress and give the deck added support. It also features non-aligned gauge wheels so the rear wheels don’t track behind the front wheels to reduce grass layover.

It is covered by a five-year limited gearbox warranty.

This series includes four models – the FM2548, FM2560, FM2572, and the FM2584. They are ideal for use in vineyards, orchards, and recreation areas and include an electronically balanced rotor mounted on spherical roller bearings. A three section Powerband® spring-loaded, self-indicating belt tensioning system drives the rotor making it easier to tension belts for longer life. Three different blade options make quick and easy work of grass, grapevine shoots, saplings, and tree prunings.

Other features include quick-hitch compatibility that allows quick connect and disconnect from the tractor without usually leaving the tractor seat.

Heavy-duty tapered roller rotor bearings are sealed for protection from dust and debris and resists shock loads and deflections.

Ideal for estate mowing, this mower’s weight has been reduced from the company’s commercial series so that it fits compact tractors in the 30 to 55-horsepower range. It has a cutting width of 11-inches and cutting height of 1-inch to 5.5-inches. The deck is made of 10-gauge steel and measures 4-feet wide and includes a 6-inch overlap, coupled with a single beam hitch and equal angle driveline. So it can make tight turns without streaking. The decks include rear discharge and angled deflector to eliminate the need for chains and to provide even distribution without clumping.

It is available with an optional hydraulic wing unlock, features counter blade rotation on the center and right decks to prevent the tractor from losing horsepower and achieves a zero turn radius.

It is covered by a five-year limited gearbox warranty.