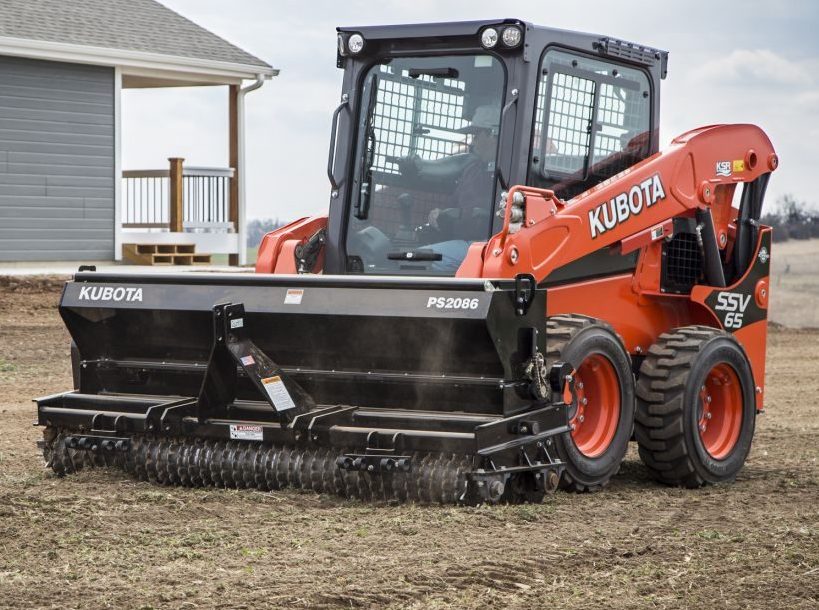 Although for most regions of the U.S. seeding is far from one’s mind however, it’s never too early to start planning for Spring.

The eight series include:

These rotary/spin type Broadcast Spreaders are capable of spreading seed, sand, salt, top dressing, lime, prilled/granular fertilizer, and most other types of granular materials at delivery rates ranging from 43 to 890-pounds per acre. An agitator extension comes standard. This series of spreaders is ideal for farms, golf courses, food plots, park systems, athletic fields, campuses, and smaller municipal or commercial operations. The models in this series are also ideal for spreading sand or salt in ice and snow conditions.

All models include a plastic agitator wheel with steel arm that is used when spreading light fluffy materials including grass seeds and some light aerated powders that tend to bridge.

They have stainless steel distributor plates that guard against corrosive materials and can be adjusted into four different positions for maximum spreading precision and uniformity.

A built-in tow hook can handle up to 1200-pounds and is ideal for hauling extra sacks of fertilizer or seed.

The one-piece seamless polyethylene hopper is resistant to corrosion.

This series includes three models –- the PFS4000, PFS5060, and the PFS8010. These pendulum-type broadcast spreaders can spread seed, top dressings, prilled/granular fertilizer, lime, and iron at delivery rates ranging from 44 to 890-pounds per acre. They have a spreading width of 20-feet to 46-feet. Optional spouts are available for narrow spreading, vineyard spreading between rows, and vineyards/orchards spreading on rows only.

The models are compatible with the B Series, L Series, MX Series, and M Series Kubota tractors.

Other features include an optional hydraulic discharge opening for the PFS5060 and PFS8010 that allows the tractor driver to open and close the discharge gate hydraulically on the go.

The models require pull-type horsepower and have a weight of 350-pounds and 563-pounds.

They are compatible with the B series, BX series, L series, MX series, and M series Kubota tractors.

Other features include a shielded front to guard against the spreading of materials in front of the spreader.

The spinner, distributor, vanes, hopper door, and adjustments handle are all made of stainless steel to prevent corrosion.

The FPS series includes one model –- the FPS48. The food plot seeder features discs that open and break up the soil surface to prepare for seedbeds or planting. It then spreads the seeds while simultaneously pressing the seeds into full soil contact with a trailing fluted roller/packer. It can also be used to spread fertilizer, lime, gypsum, and other soil conditioning amendments at distances ranging from 4-feet to 20-feet. The spin spreader can also be used in the off-season to spread sand or salt in icing or slick snow conditions.

The FPS48 requires pull type horsepower. Its width is 48-inches and it is compatible with the B series, BX series, L series, MX series, and M series Kubota tractors.

Other features include an electric spin spreader that dispenses seed, a restrictor plate that permits smaller seed to run through the spreader at a lower volume per acre. There is also a deflector that reduces seed dispersion width down to 48-inches.

It has 16-inch notched disc blades that aggressively digs and cuts to break hard soil.

It also features a rear roller that incorporates the seed for seed-to-soil contact. The roller pivots for easy storage. There is no need to take the spreader off the tractor.

The seed hopper loading height is 42-inches for easy use.

This series includes four models –- the APS1548, the APS1560, APS1572 and the APS1586. This seeder is designed to be a combination planting and cultivation tool and can be used on golf courses, school system properties, municipalities, rental yards, construction sites, sports fields, and college campuses. In addition, the narrow width of each model makes them effective in seeding residential lots, grassy medians, or rights-of-way adjacent to sidewalks, community parks, sporting facilities, and golf courses. The narrower widths also permit the seeders to be used for planting in areas where undulations, moguls, and depressions are prevalent.

They are compatible with the L Series, MX Series, and M Series Kubota tractors.

Other features include a quick-hitch system that allows the user to quickly connect and disconnect the implement from the tractor without leaving the driver’s seat of the tractor.

This series include two models – the OS1548 and the OS1572. The solid stand over-seeders offer precise placement and seed-to-soil contact. So they are ideal for over-seeding existing stands of grass or established new turf.

You have a choice of straight or curved knives. The knives slice into the ground to create slits for the seeds. Fluted seed cups precisely meter the desired amount of seed in a broadcast pattern and delivers outstanding metering accuracy.

The models also have solid, cast-iron packer wheels that finish the planting task by pressing and firmly packing the seed into the soil. The process eliminates most air pockets.

A rear roller drive allows you to choose from gauge-wheel drive or plant close to sidewalks and obstacles.

Other features include a quick-hitch system that allows you to connect and disconnect from the tractor as you sit in the driver’s seat.

This series has one model –- the PS1572. It is an ideal machine for a landscaper who does lawns, community parks, and areas between the curb and sidewalk. This model performs better than larger models in areas where there are light moguls, and undulated and depressed land. The main seed box includes the standard fluted seed cups and agitation so you can seed most turf type grasses. It allows you to seed a variety of other seeds from peas to alfalfa.

The model requires 25 to 60 horsepower and is 72-inches wide.

Other features include a quick-hitch system so that you can connect and disconnect the implement from the tractor while sitting in the driver’s seat.

The fluted seed metering cups assure precision seeding. Each flute grabs the right amount of seed for even distribution.

Turn the dual sprocket over and you create different seeding rates. The easy drive system assures a consistent flow of seed.

Spring mounted rear packer rollers offers more down pressure and assures that the seeder stays in contact with the ground.

Cast iron front packer rollers crush the clods and packs the seed in to assure seed to soil contact. A coil spring tine track scratches tire tracks out of the surface.

This series includes two models –- the PS2072 and the PS2086. They are ideal for landscapers and contractors. They include bi-directional seed cups that allow the seed to travel forward or backward.

Machine widths are 72-inches and 86-inches. They are designed for the SVL Series and SSV Series Kubota tractors.

Other features include a quick-attach mount and three-point hitch, a large capacity seed box, and floating packer wheels that follows the contours of the land and allows the models to stay in contact with the ground for consistent seed soil contact.

This series is available only through Kubota dealers.